Please click this link, complete the form, and we will engage with you in due course.

Sovereignty and its Relationship to Natural Law Is…

A set of universal, inherent, objective, non-man-made, eternal and immutable conditions which govern the consequences of behaviours of beings with the capacity for understanding the difference between harmful and non-harmful behavior.

The understanding of Natural Law is centered upon bringing our own Conscience into alignment with Objective Morality.

We are all very familiar with birth registration, which has been a requirement of most commonwealth State Governments since 1873. However, the Births and Deaths Registration Act 1873 and subsequent amendments etc., are all suspended under the Geneva Convention 1930, due to the international bankruptcy. There are 193+2 countries, publicly operating in bankruptcy, that make up today’s world. This leaves us with a predicament as to whether or not our current birth registration is a lawful one. A distinction therefore has to be made between what is private-(Uniform Commercial code [UCc], or common law) and what is public-(legislative, or admiralty law), as we shall clarify and qualify further ahead.

It has become obvious to those awakened to sovereignty certification that the application, registration and submission of a birth certification form is the creation of a legal entity (i.e., the ALL CAPS NAME) and a subsequent legal-title claim, albeit a fictional title. It is fictional because a bankrupt entity such as a state government cannot lawfully create and issue titles of nobility nor Allodial titles. No corporate entities or agents thereof are authorised to issue Certificates of Sovereignty or Certificates of Allodial Titles. However, Allodial title to our physical flesh and blood body a.k.a., the Sovereignty Certificate is applicable, lawfully supersedes and is paramount to the birth certificate.

A certified sovereign human being, therefore, is acting within his/her own ordained sovereignty and birthright jurisdiction of laws and principles; as if acting within their own authority and nationality, so to speak.

Let us consider this table of distinctions:

Distinction between Public and Private Jurisdictions

Therefore: statutes, legislations and acts of parliament are only applicable to legal entities that are registered within the public, national state or localised realms, whereas the UCc is applicable to communications and correspondences between entities across jurisdictions. i.e., between private and public.

For instance, the birth certificate, is evidence of a legal title-claim of a fictional legal entity seen as the ALL CAPS NAME, and is a mis-representation of a real Human Being that exists in reality. To resolve this mis-representation, we issue a Certificate of Sovereignty as the true Allodial title to the natural Human Being. The interface between the two titles therefore, is the UCc.

One is an admiralty-law title ownership claim (by the state), and the other is a re-claiming of the ordained sovereignty and birthright of the real flesh and blood body (by the real human being).

Allodial Titles to Landed Property and to Private Conveyances

With respect to landed property, for instance your home, a title deed is evidence of a legal title-claim of a fictional legal entity seen as the ALL CAPS PROPERTY ADDRESS, and is a mis-representation of a real brick and mortar property that exists in reality. To resolve this mis-representation, we issue a Certificate of Allodial title to the natural brick and mortar property. This is also known as ‘fee simple’, which refers to an individual’s absolute ownership of land and/or landed property. It is the most complete ownership interest an individual can have in real property, and with a fee simple title, the owner has the right to possess, use or dispose of the land as they choose. The interface between the two titles (i.e., title deed and allodial title) is the UCc.

The same principle applies to the legal registration of real automobiles. For instance, In the United Kingdom a V5 document is evidence of a legal title-claim of a fictional legal entity seen as the ALL CAPS VEHICLE DESCRIPTION, and is a mis-representation of a real traveling conveyance machinery that exists in reality. To resolve this mis-representation, we issue a Certificate of Allodial title to the real travelling conveyance machinery. The interface between the two titles therefore, is the UCc.

So, these distinctions must be made clear in the minds of certified sovereigns, yet, in the context of working with and not against.

Consider the playing field of the diagram ahead, which is liken onto a tennis court. Either side of the court represents two different jurisdictional courts of law. One is admiralty law and the other, is the common law. And, the interfacing and interacting body of law between them, is the UCc. 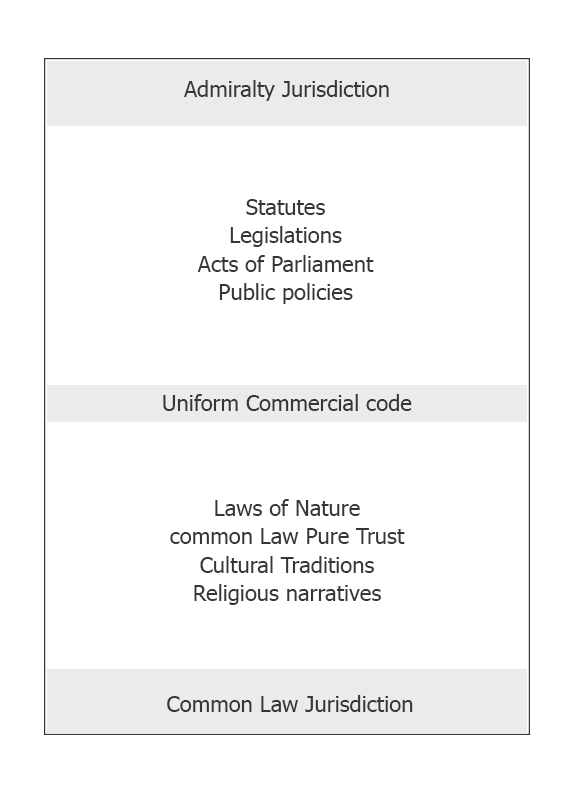 Sovereignty Certification is the simple sight and/or visual recognition act of one’s humanity by the Exchangor/Grantor of the cLPT, one of the two participants in the fidelity ceremony. Since we live concurrent to contracts-law societies, it is paramount that every man and woman become sovereign certified, which is to issue a properly enacted Allodial title to their body. The main benefit is that a certified sovereign now has the right of enjoyment of all STATE provided benefits/privileges without being subject to statutory obligations and banking rules.

Once Allodial title to the body is properly enacted and issued, the earlier birth registration and all its government obligations become superseded. However, the individual still continues to enjoy all benefits/privileges provided by the STATE for his/her benefit under the provisions of the cLPT (and the rules of private necessity).