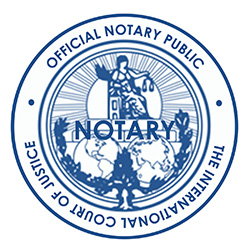 The status of the Notaries public has to do with an officer of the law (or officer of the court) whose primary function is to bear witness to certain documentation. Historically, Notaries public (also called “notaries”, “notarial officers”, or “public notaries”) hold an office that can trace its origins back to the ancient Roman Republic, when they were called scribae (“scribes”), tabelliones forenses, or personae publicae [Black’s Law Dictionary 19th edition].

In other words, notaries were like minute-takers (note-takers) at official meetings. Over time, Notaries public rose in rank from being mere recorders of facts and judicial proceedings, copiers and transcribers to a more learned profession prominent in private and public banking, transaction, commercial and title conveyance affairs.

The duties and functions of Notaries public are described in Brooke’s Notary on page 19 in these terms:

Generally speaking, a notary public may be described as an officer of the law whose public office and duty it is to draw, attest or certify under his/her official seal deeds and other documents, including wills or other testamentary documents, conveyances of real and personal property and powers of attorney; to authenticate such documents under his signature and official seal in such a manner as to render them acceptable, as proof of the matters attested by him, to the judicial or other public authorities in the country where they are to be used, whether by means of issuing a notarial certificate as to the due execution of such documents or by drawing them in the form of public instruments; to keep a protocol containing originals of all instruments which he makes in the public form and to issue authentic copies of such instruments; to administer oaths and declarations for use in proceedings to note or certify transactions relating to negotiable instruments, and to draw up protests or other formal papers relating to occurrences on the voyages of ships and their navigation as well as the carriage of cargo in ships.

According to the Notary’s Manual 1977, The Office, page 5: no actual qualification of sex nor legal position is required for one to be a notary. What matters, is age of maturity and an official appointment by a judge of senior standing. Thus, the Official Notary Public of First Republic Registrar foundation (FRRf) is appointed by a Senior Sovereign Judge of the Sovereign ICJ-ICC (International Court of Justice – International Criminal Court). As the ONP of FRRf he also has the powers to appoint other notaries thereunder.

Powers of the Notary

According to the publication: ‘A Manual for the use of Notaries public and Bankers’ by Bernard Roelker 1864, bankers and notaries are placed shoulder to shoulder as though having similar and/or equal powers. The Notaries public, therefore, is also considered to be a banker of the courts thus having the capacity to draft and authenticate negotiable instruments (bills of exchange, promissory note, letters of credit and the likes). In a similar capacity, a bank officer can be commissioned as a viable witness to attest certain documentation, i.e., authenticating the identity of a client by signing and sealing (stamping) a photocopy of his/her passport.

At FRRf, the Official Notary Public is also an Official Certified Sovereign Underwriter. He therefore has the capacity and power to underwrite Certificates of Sovereignty (for individuals, corporations and states), Allodial titles (for landed property and private transportation machinery), Trusts, Wills and Negotiable Instruments (debt notes as well as letters of credit). The OCSU is therefore a scribe in his own right. He is qualified by virtue of his ability to underwrite, perfect and authenticate the above by way of his own signature and seal (stamp).

A Proto-Notary in general (and also by a long stretch) is the equivalent of saying a Primary or First Notary. This individual is qualified by natural process, over and above any contractual appointment. Meaning, the Proto-Notary is qualified beyond the normal expectations of a trained notaries public. The OCSU and Exchangor/Grantor of FRRf is also a Proto-Notary. He has the natural capacity to underwrite as well as authenticate documents by his/her own authority, hand and seal. The jurisdiction of the Proto-Notary is International and is universally domiciled. Therefore, whatever he officiates is taken to be a decree by the highest order and authority that can be recognised by anyone on earth-plane.

The Proto-Notary of FRRf is not just concurrent to a prelate ecclesiastical officer, he is also a scribe of spiritual and mental sovereignty, known as Nebu Ka Ma’at; Golden Ray of Justice Liberation and Balance.

The capacity of the Proto-Notary includes the equivalent of a Primary Banker or Proto-Banker (to coin a term). This means he has the power to also officiate banking instruments both public and private. Thus, the Proto-Notary can vet and investigate, draft, underwrite and officially certify literally any banking negotiable paper. In the event that the value of an asset had not been properly surveyed before, the Proto-Notary can vet/investigate, determine the asset’s proper commercial value and thereby issue a certificate to that effect.

Other duties of notaries in general includes notarial presentments. That is to say, the transferring (sending) of private communications to recipients on behalf of clients. This gives the documentation being conveyed a more robust and official recognition, so to speak.

For more information on our notarial services contact us here.