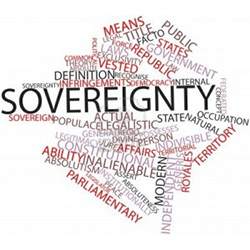 The inherent relationship between sovereignty and the known equitable maxims.

Strictly speaking, although the common Law Pure Trust (cLPT) foundation is domiciled within its own exclusive jurisdiction and is not in any colourable jurisdictions of local law (statute, legislative, admiralty, equity etc), it also inherently (automatically and naturally) includes the maxims of equity, which we have rebranded as the Equitable Maxims of Sovereignty. For instance, the maxim of: ‘Sovereignty will not allow a statute to be used as a cloak for fraud’ can be upheld within the minds of the Antrustiones (trust officers and agents). That is to say, the trust officer will take the position of dishonour of a contract offer (with UCc 3-503) and reserve his/her birthright (with UCc 1-308), should there be some degree of unconscionable behaviour by one or more parties to the contract. In this context, the trust officer is exercising the maxim inherently (mentally), by virtue of his/her move toward a dishonour and reservation of birthright, with respect of the contract in breach.

As can be seen, the 20 maxims are largely inherent within us. They are based on our inner conscience, morality and standards of good judgement and fairness. Thusly, the maxims are invoked and activated based on the inner rationale and conscience of the individuals to a contract, agreement or other arrangements.

Another example of the point being made is with the maxim of: ‘The Sovereign acts in personam and not in rem’. This maxim must always be upheld within the minds of the Antrustiones (trust officers and agents). That is to say, the trust officer must always remember to act within his/her human capacity-(personam) and not as if presumed to be a legal or commercial entity-(rem).

The ordained and certified sovereign must always be aware that statutes, legislations and acts of parliamentary bodies are literally based on several prime directives. One of these prime directives is within a commercial and monetary context. In other words; it is all about how much revenue can be generated, from a summoned ‘case’ at hand, for the benefit of the courts and the plaintiff/ claimant etc.

Take for example, an individual who is in breach of repayments on a loan-contract based upon the fact he/she had become very ill and was unable to work. The lender (bank) may literally disregard any presented proof of illness, based on some non-disclosed reasons. Then, the bank issues a standard default-notice and thereafter pursue a case against the individual for payment recovery. Usually this may be regarded as an open and shut case, if the individual accepts the lender’s case by operation of law. But on the contrary, the ordained or certified sovereign would exercise his/her birthright by dishonouring the lender’s claim (with UCc 3-503). This effectively means that the sovereign is putting all obligations of the loan agreement on hold and in dispute, until a conscionable consensus can be reached between both parties.

The fraud aspect of the loan agreement is another subject-matter within itself to consider. It is the understanding of many individuals within the banking space, that loan-agreements are treated as promissory notes. These promissory notes are taken by the bank and put on ledger as an asset from which the loan amount is literally created. Put another way, the promissory note is taken to be an asset within itself and thus it is converted and held as money on account. The bank then literally loans the money back to the individual. With this understanding (although very difficult to prove publicly), the sovereign my view the situation in a way as if to say: these processes were not disclosed on the loan-agreement, and thus presume that the bank acted fraudulently [non-disclosure is considered unconscionable in personam]. But on the side of the bank, the process would be deemed as: well within their banking laws and in accordance with their private policies.

Either way, the account would now be labelled as ‘in dispute’ until a mutually benefitting arrangement can be made between the parties.

b) Sovereignty acts in personam and not in rem

The ordained and certified sovereign expresses him/herself through physical form, in personam, and by no other means man-made. Acting in personam relates to your personal character, your individuality (including mind). When you were born, your mother was obligated to register your birth with the State. Thus, a fictional legal entity was created in your name albeit all upper case, e.g., JOHN HENRY DOE. A certificate of live birth was issued. This is the creation of a legal-entity, which is fictional inasmuch that it is a lifeless dead-entity that only exists on paper. Claims made against individuals, whether at the county courts or magistrate courts, are made against this fictional legal-entity and not against the real living man/woman in personam. Claims made in personam are usually made at the High Court of Justice, Chancery Division; since this is where the judge (lord or master) is expected to deal with the matter in personam and not in rem. Likewise the mind of the sovereign individual man/woman always acts in personam, whilst reserving all his/her natural birthright (UCc 1-308).

There are several landmark cases in England where this maxim was exercised, for example: Westdeutsche Landesbank .v. Islington LBC 1996. In this House of Lords case, Lord Selbourne stated that: “The courts of equity in England are, and always have been, courts of conscience, operating in personam and not in rem…”

That is to say, the courts of equity will only act or make judgement considering the conscience of the individual defendant in relation to the particular case before it. This is the general rule of equity, as opposed to making judgement based upon some violated statute, legislation or contract, which would be to pass judgement in rem.

c) Sovereignty regards the beneficiary as the true owner of property

To conclude, the sovereign individual is one who is very much aware of their birthright as ordained upon him/her by the creator. It is the birthright of the sovereign to enjoy life, liberty and happiness including all natural-benefits without the intervention or disruption of legal-entities (who normally operate in rem, and not in personam). At FRRf, we encourage that the readers study the 20 Maxims diligently and re-contextualize them into their own life experiences.