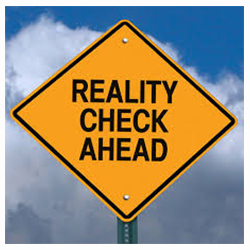 Sovereignty is ultimately about freedom. Every man and woman on earth plane today has some idea of what freedom means to them. Indeed, it is our birthright and sovereignty to have freedom of choice, of any course of action, in any given situation. With that being said… people who are truly ready to embark upon the journey toward Sovereignty are in for a huge reality-check. Every man and woman must engage the practicality of having to unlearn and deprogram their mind of literally everything that they had previously believed or accepted as truth. He/she must relinquish themselves of every belief and accepted narrative from all mediums of information dissemination such as: academic education, religious doctrine, media streams, government guidelines, healthcare and so forth.

How serious are you with wanting to become a sovereign, and why? Are ready for a phase-shift in your perception of reality? Are you ready for the reality-check of your life?

The journey toward Sovereignty, is rather like stripping away the shell of an egg in order to see what’s on the inside; the white and then the yolk. It is a conscious journey within. We are met with several layers until we arrive at the core. But it is not just information that we must strip away, it is also the characteristics and personal tendencies we take for granted and acknowledge as our identity. In other words, true freedom, comes with perfect alignment with the soul, which is the essence and pure-conscious being that we are. This is not a very easy task at all. Many people experience cognitive dissonance along this path toward freedom. Because, it can be a very difficult task for many individuals to simply relinquish their long-held belief systems. The idea that what they once believed as their faith to now be untrue, is nerve wrecking for most. However, for those who have reached very high states of consciousness can bear witness to the bliss of quantum freedom.

Introduction to Sovereignty and Quantum Freedom…

The goal is to arrive at Quantum Freedom, also termed as the Quantum-Presence of Source-Reality [citation: Wingmakers philosophy]. This is where the soul is at its most powerful position; quantum freedom. Eckhart Tolle puts it best in his book title: The Power of Now! The sovereign individual is one who experientially comprehends the power of now, the power of alignment with the soul in the present moment. What is the soul? Soul is light. Soul is the same as saying sol. And sol, is light. The sun (which is the most powerful luminary in our solar system) is also referred to as sol in many ancient cultural narratives. So, aligning with our soul is the same as saying alignment with the sun. The sun is a transducer and regulator for quantum energy. Quantum energy is source energy. With such alignment, the individual becomes a channel for quantum information. In other words, the sovereign individual literally becomes a channel for answers; inspiration and revelations. At the very least, he/she empowers him or herself with source energy, which is quantum in nature. The naturist would say, ‘I am one with nature.’ The syncretist would say, ‘I am one with all that is.’ The religionist might say, ‘I am one with God.’ Call it what you wish. It is all the same: Sovereignty!

Sovereignty in general must be viewed from within and from without. The individual recognises his/her own development toward sovereignty from within, whereas onlookers recognises the individual’s change of lifestyle from without. From within, the individual sovereign aligns with quantum information, which essential is decoded in what we might term the laws and principles of absolute nature. From without, onlookers will experience the sovereign individual as being self-governing, self-sufficient and self-regulating, in accordance with the said laws and principles of absolute nature.

The mind is the plane within which we acknowledge thought. The brain is the organ within which consciousness interprets thought. The seat of consciousness therefore, is the brain. But thoughts do not belong to the observer i.e., thoughts do not originate with the conscious aspect of our being. Thoughts are spirits in energy-formation that pop in and out of the mind. The awareness of thoughts comes from our consciousness of them. But we do not originate them. This is important to understand as a sovereign.

Knowledge of the difference between the brain and mind; awareness and consciousness; thought and reason, will aid us in our quest for true freedom. To elaborate further, thoughts are inspirations and revelations in spirit form that pop in and out of our mind, based upon what we inherently attract. Whereas, reason, is a function of pure-consciousness that discerns whether a thought is beneficial or not; positive or negative, in relation to a specific agenda.

The brain is not just the seat of consciousness. It is also the organ which interprets and thus give meaning to everything that comes into our awareness. But it is meaning that tends to trap consciousness into this earth plane of reality. Observing what happens in any given situation, instead of reacting to what happens with meaning (limited interpretation), is a step in the right direction toward freedom. This is true for every thought that comes into our mind. However, it is near impossible to do this 100% of the time. So, as a form of practice, the budding sovereign must learn the art of choice. He or she must learn to discern what thoughts are beneficial and what thoughts are not. Address the beneficial thoughts in whatever way necessary and discard the others. Discarding a thought is not an active process though. Simply, we allow the ‘non-beneficial’ thought to come and go without entertaining it nor condemning it. If either we entertain or condemn a thought, we give it life (permission) to remain in our mind. But allowance of its movements to come and go, without entanglement, reduces its cohesion to remain.

Spiritually and mentally speaking we all have a self-created identity; a law, nature and purpose identity, which also manifests on earth plane. Some of us have multiple identities, depending on specific sets of circumstances. Part of deprogramming the mind is acknowledging the reality that each identity (a.k.a. personam) is just an embodiment of tendencies; like the egg shell we mentioned earlier. Some people try to contextualise what sovereignty is, ultimately, by using the mind. This is gravely impossible. The way to get a glimpse of sovereignty (a.k.a. quantum reality, quantum presence) is to relinquish the mind of every possible idea, thought and interpretation of sovereignty. In other words, the way in which one aligns with true sovereignty is to strip away everything that sovereignty is not. Check? Hence, sovereignty is experienced internally before external manifestation occurs.

True Sovereignty is quantum in nature. It is spiritual. It is an internal experience. However, since human beings of today are interacting with commerce and contracts law societies, it is necessary to obtain a Sovereignty Certificate, just to show and prove your position contractually, at the very least.

View the Equitable Maxims of Sovereignty here, and in general continue your studies by reading the following posts:

The History of Sovereignty